How Much Carbohydrate Can You Store?

1. Used as fuel substrate and oxidized in several tissues of the body, mainly as glucose;
2. Storage as glycogen in skeletal muscle (80% stored) and liver;
3. Storage as triacylglycerol (TAG);
4. Conversion of glucose molecules into C3 precursors in the splanchnic area which pass on to the liver where they are used as substrates for gluconeogenesis. 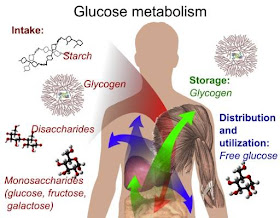 Glycogen is a homopolysaccharide composed of subunits of glucose. The synthesis of glycogen consists of adding individual glucose units to an existing glycogen chain, forming extensively linked branches every 8-12 residues on the glycogen molecule. The more extensively branched the molecule is, the greater the ability it has to rapidly supply energy.

Looking at the actual storage of glycogen in the body it was reported back in 1975 that a nonobese man weighing 70 kg stores about 350 g of muscle glycogen and 40-50 g of liver glycogen (9), equivalent to about 1600kcal of energy stored in the body in the form of glycogen.

The body’s glycogen reserves are usually maintained at between 250 and 500 g in a 70 kg adult man. More precisely, others reported that glycogen storage capacity in man is 15 g/kg body weight and can accommodate a gain of ≈500g before net lipid synthesis contributes to increasing body fat mass (13). For a 70-kg man with ≈40% of his weight as skeletal muscle and a liver weighing 1.8 kg, one can estimate that ≈3 mol glycosyl residues or almost 500 g of glycogen are stored in the body.

However, higher values have been reported. For subjects with a mean body weight of 72kg, Hedman (14) calculated maximal values of 700 g glycogen. Others came to the same conclusion but suggested that a further 100g could be stored with 2 weeks of carbohydrate overfeeding or by using the glycogen-loading technique (15).

Bergstrom et al (16) reported values in the range 500-800 g in some of their subjects who followed a glycogen-loading technique. The maximum increase in stored glycogen ever observed was 1146g in one subject (13). Data derived from this overfeeding study (16) suggest that the glycogen stores can maximally accommodate 800-900 g of carbohydrate and perhaps as much as 1-1.1 kg in trained athletes, which are among the highest glycogen storage values reported in the literature (13).

This glycogen serves as the primary supplier of energy during most forms of exercise (18). Glycogen is stored with two to four times its weight of water (19).

In addition, the extracellular fluid can accommodate less than an extra 10 g glucose in order to avoid glucosuria.


Why do we store carbohydrate as polymers and not monomers?


The reason why carbohydrate is stored in polymeric form (glycogen) is dictated by osmotic pressure considerations (20). Osmotic pressure is the hydrostatic pressure required to stop the net flow of water across a membrane separating solutions of different compositions (21). 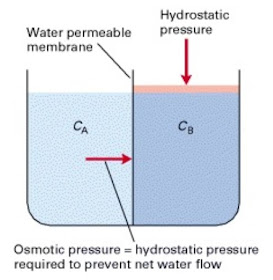 A 70 kg man stores about 70 g of glycogen in the in the cytosol of a 1.5 kg liver, and the total cytosolic volume of this liver is about 1 l. The osmolarity of body fluids is maintained at around 300mOsM.

If carbohydrate was stored as glucose monomers a 0.43 Mol of glucose in 1 l would exert an osmotic pressure of 430mOsM, above the threshold of 300mOsM (20). The solution is to store it as polymers with a very low osmotic pressure.